WHAT DID RUSSIAN BOMBERS DELIVER TO VENEZUELA AND NICARAGUA ? 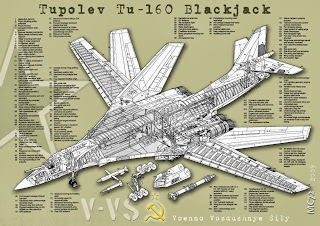 Many years ago, when I was engaged in laundering criminal profits for narcotics traffickers, a number of them entered, and competed in, the Miami-to-Montego Bay Yacht Race. After the race, at least two of the sailboats quietly smuggled drugs back into the United States, notwithstanding the global publicity the media gave to the race, after two of the entrants were briefly seized by the Cuban military, for venturing inside Cuban territorial waters. We call this hide in plain sight; now look again at a recent event, reported here this week.

If you thought that the recent visit, to Venezuela and Nicaragua. of two Russian Tu-160 long-range strategic bombers, was merely a "courtesy visit," and a public relations stunt, think again. The costs of fuel, maintenance, and the huge flight crews needed to ferry these aircraft across the Pond and back, do not justify the small amount of publicity that Russia might derive from such a "goodwill visit."

No, there's obviously more to the story. Allow me to speculate aloud; these two bombers, whose purpose is to deliver a knockout punch to an adversary, must have been used to deliver military cargo to Russia's most loyal allies in the Western Hemisphere. You do not incur such a huge expense, without getting some bag for your buck. Whether they were missile components, for the newly-completed Venezuelan missile site on the Caribbean coast, or even nuclear materials, is not known, but I assure you that those bombers disgorged important cargo to friends of Russia.
Posted by Kenneth Rijock at Thursday, November 07, 2013