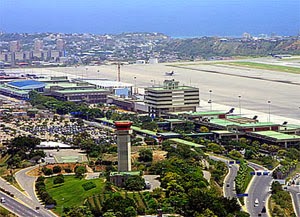 There was a curious incident at the Simón Bolívar en Maiquetía Airport in Venezuela yesterday: an alert Air Canada pilot noticed that he had five extra passengers on his aircraft, AC flight 75 to Toronto. Composed of four Iranian nationals, and one Afghan citizen, the "stowaways" had counterfeit tickets, and no visas allowing them to enter Canada. They were detained by Venezuelan authorities, as were two airport security guards and an Air Canada ground employee, as those individuals had apparently allowed the men to process for departure, to enter a secure area, and to board the aircraft. Was there official Venezuelan facilitation of their mission, and was the government forced to make arrests when the Iranians were exposed ?

If you are wondering how they ended up in Venezuela in the first place, Iranians, especially those on government business, are working on a number of joint projects there, and can easily obtain a visa at the Venezuelan Embassy in Tehran. But why were they seeking to enter Canada without permission ?

My first thought is that they apply for political asylum, and obtain temporary residence in Canada. Inasmuch as they are all obviously working on behalf of the Iranian Government, any such application would be purely to achieve permission to stay in Canada. The question remains, why go to all this trouble ? Were they an Iranian Revolutionary Guard Corps advance party ?

What was the true purpose of their travel to Toronto ? To commit an act of terrorism on board, or later, in Canada, or in The United States? We cannot say, but the fact that an alert Air Canada captain was paying attention to detail, may have frustrated and derailed an act or terror against the United States or Canada.

Today is the anniversary of the 1979 Iranian takeover of the US Embassy in Tehran, and dates of previous events are often used to stage new attacks. Whatever their hidden agenda, and whether the Government of Venezuela was implicated,  we may never know, but anything coming from Venezuela, into North America, should certainly encounter more scrutiny in the future. Something wicked this way comes.