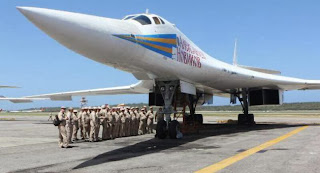 The high-profile visit, to Venezuela and Nicaragua, of a pair of Russian Tupolev-160 long-range strategic bombers, caused increased tensions in the region when the aircraft violated Colombian airspace over its island territories, without requesting transit permission in advance. Colombia immediately scrambled a pair of Kfir fighters, which escorted the bombers until they departed Colombian airspace.

This was clearly not an accidental intrusion. Colombia is a long-time ally of the United States, and Russia supports the left-leaning regimes in Venezuela and Nicaragua. The United States, and its allies,were aware of the flight of this pair of Russian aircraft into Latin America, as they has been shadowed by NATO aircraft while off the coast of Norway.

Incidents like these only serve to not only increase regional tensions, and strain international relationships, they pose a clear and present danger of deteriorating, from an armed confrontation, into violence, whether through intentional action, or accidentally. Latin America does not need to become a region where global powers test each other. Any further Russian-initiated incidents could affect Country Risk.