THE DEVIL WENT DOWN TO MALTA

The devil went down to Malta, he was looking for a Soul to steal,

He was in a bind, because he was way behind,

And he was willing to make a deal.

When he came upon his young man on a computer, collecting bribes, and playing it hot,

The devil jumped up on a fireproof safe,

"I guess you didn't know it, but I'm a laundry man too.

And if you care to take a dare, I'll  make a bet with you.

but give the Devil his due.

I'll bet a safe of Euros against your Soul.

'Cause I think I'm better than you."

The boy said "My name's Joey, and it might be a sin,

But I'll take your bet, you're gonna regret,

Cause I'm the best l-man that's ever been."

"Joey, open up sour screen, and play your keyboard hard

'Cause Hell's broke loose in Malta, and the Devil deals the cards

And if you win, you get this shiny car bomb made of Gold

But if you lose, the Devil gets your Soul."

The devil opened up his laptop, and  he said " Ill start this show."

And he dropped bribe proceeds clear across the Pond,

And it landed with a hiss

Then a crew of  his disciples joined in

And cleaned billions without a miss.

When the Devil finished, Joey bowed his head,

"Cause he knew he'd been beat,

He laid his tablet on the ground at the Devil's feet.

That's the last anyone ever saw of Joey,

For his disappeared that day,

But someone said Bobby came and opened that safe,

But Joey's red hand reached out and pulled him inside,

as it snapped shut forever, they say. 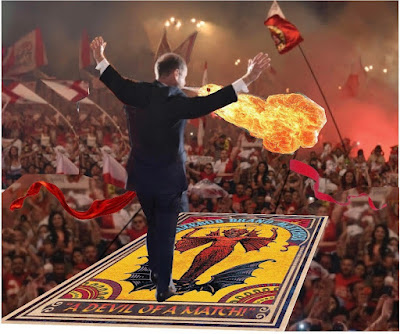