ALI SADR FILES ANOTHER DISCOVERY APPLICATION IN FEDERAL COURT IN THE U.S.


Ali Sadr Hashemi Nejad has initiated another Discovery proceeding in Federal Court in the United States, seeking documents and testimony to assist him in his pending claim against the Republic of Malta. He has filed the Application through ALPENE, LTD., a Hong Kong corporation that owns Pilatus Holding Ltd., a Maltese company, which in turn owns 100% of Pilatus Bank. Filed in the Eastern District of New York, the citation is In re Application of Alpene, Ltd.,  Case No.; 21-mc-2547 (EDNY).

This Application, which seeks to collect evidence for use in an international arbitration proceeding against the Republic of Malta, and his pending before the International Centre for the Settlement of Investment Disputes, of the World Bank, Alpine reportedly filed its claim on July 2, 2021. It alleges that Malta, by seizing Pilatus' Assets, stripped Alpine of all its rights of ownership, which it them improperly expropriated.

It claims Malta engaged in"wrongful, reckless and politically motivated actions," that Maltese officials  stripped the owner, managers and board members of their rights, and halted all banking transactions, whilst making false statements. A 20-page Memorandum of Law was filed in support of the Application. 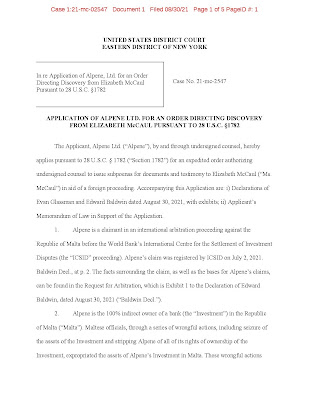 it is further alleged that Elizabeth McCaul, in engaging as the Competent Person, Lawrence Connell,  who had no prior banking appearance, engaged him for a corrupt purpose, and had a conflict of interest due to her connection with Maltese regulators, Additionally, a purportedly lucrative legal fee arrangement was created with a local law firm, with exorbitant charges.  The Applicant, Alpene, wants to subpoena McCaul for deposition, and for the production of documents.

The Application was filed August 30, 2021, amidst the FIAU €5M Fine levied against Pilatus Bank, and the filing of criminal money laundering charges against former Pilatus Bank and its MLRO, Claude-Anne Sant Fournier, and it has added still more craziness to an already chaotic Maltese legal scene. In fact, some of the pleadings are dated yesterday, September 1, when everything went south for Pilatus. What weight the United States Magistrate Judge will give to these other proceedings is unknown at this time.

There is also the possibility that Ali Sadr Hashemi Nejad himself will be charged in Malta; in fact, he may have already been the subject of an arrest warrant, according to Maltese media. Rumours appearing in Maltese media claim arrest warrants were issued two days ago against a large number of targets.

When Ms. McCaul retains counsel, and she appears in this case, we shall further update our readers.