Bad things, they say, come in threes. Well, Malta's failing grades for anti-money laundering just showed up elsewhere in Europe. The Basel Institute on Governance just published its 2021 AML Index, and Malta ranks closer to the bottom than it is to the top.

When you add it to the FATF Greylisting, and the UK High-Risk Designation, Malta is indeed in major trouble in the international regulatory community. Malta showed up in position that is dead last among all the countries in the European Union and Western Europe. In truth and in fact,many of the dodgy tax havens of the Caribbean actually ranked higher than Malta.

Its score was frighteningly close to those of red-lined high-risk jurisdictions; only a half point separated it from them. Obviously, the Basel Institute was not persuaded by the cosmetic new laws and regulations, and moved by the abject lack of money laundering prosecutions and non-existent convictions.

Malta ranked last of Europe's 24 listed jurisdictions. Maybe now. the Government of Malta will begin to take concrete steps to reform and improve its AML structure, and start with criminal prosecutions for money laundering. 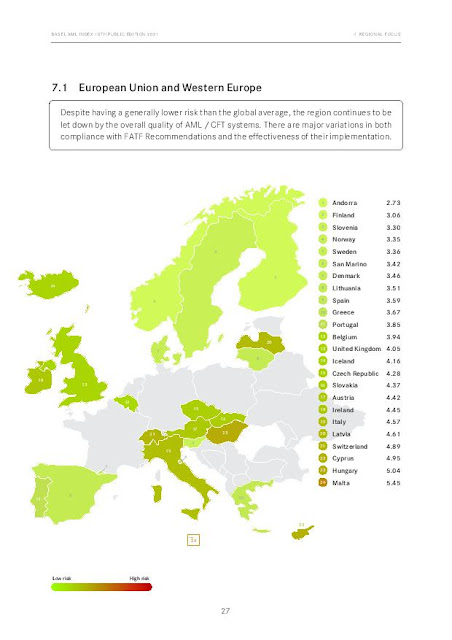