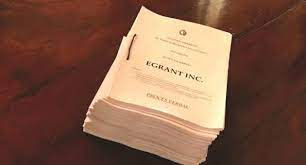 Joseph Muscat's arrogant attempt to link his "apology" to the Daphne Caruana Galizia family to their acceptance of the bogus Egrant Report verges on extortion. After all, the report, whose conclusions were fabricated by a magistrate bribed with a judgeship to fix the results, has been universally condemned as inaccurate, and not worthy of consideration.

Malta's whistleblower, Maria Efimova, who first went public with the truth about the fact that Michelle Muscat was the beneficial owner of Egrant stock, does not pull her punches; "Muscat can say as he pleases. Daphne saw the proof for Egrant, what is why she revealed in her blog. And it will be confirmed once I have whistleblower status."

She knows that Muscat  is under tremendous pressure at this time, and is trying to counter-punch: " Muscat feels it and he is trying to be proactive."

She wanted, at this time, to clear the air about her situation; "First of all, I am surprised that Maltese media haven't mentioned my contributions to Pilatus revelations in their recent articles about the bank being charged with money laundering. I feel like Malta is trying to forget who was Daphne's source in Pilatus case. Even Manuel Delia, who used to support me, he wrote nothing in his blog.

"Many people blamed me for fundraising doing forensic analysis of the evidence I have. They say I kept the money for myself, which is not true. They forgot though, that until my family spent €37,000 for lawyers assisting me and my husband, while we were fighting against the ridiculous arrest warrants Malta and its ally, corrupt Cyprus, had issued. So, the fundraising was obviously not about me becoming rich by fooling Maltese people.  I was right about Pilatus, that is a fact, confirmed by the Maltee FUAU. What is the Maltese Government waiting for ? They should give me whistleblower status immediately."

How about it, Mr. Abela; what is your excuse now as to why you haven't lifted the arrest warrants and  granted whistleblower status to Maria ? The world needs to see the expert's report on the authenticity of the handwriting on the evidence. Or do you know that the Muscats will be incriminated by the information ? Extend Ms. Efimova whistleblower status or resign as prime minister.