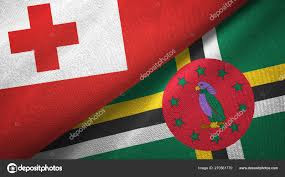 We are all familiar with "brass-plate" banks, those that have no brick-and-mortar physical location, and also virtual banks, which only exist online but are duly licensed, but what about so-called phantom banks, those that do not even have a charter, but are moving money in illicit international commerce ? Enter the " Bank of Dominica," which does not exist, in any legal form, in Dominica, in Switzerland, where it is transferring illicit capital, or anywhere in the world. How is it that Switzerland allows it to move millions of dollars ?

The bank's name came up recently, when an Italian American businessman, Paolo Zampoli, who holds a diplomatic passport from the Commonwealth of Dominica, one of the five East Caribbean states that sell Citizenship by Investment (CBI/CIP) programs, sued* Range Developments, a builder of CBI resorts, alleging that he was improperly denied a multi-million dollar finder's fee, due to him from the Cabrits Resort & Spa Kempinski Dominica. The Cabrits project was curiously built on national park land removed from park status. Did Zampoli facilitate that act we wonder ?

Zampoli alleges that Range completed, and opened, the project, without tendering payment to him of his fees, as required by a written agreement He states, in a sworn verified petition, that two Range officers, Mohammed Asaria, a Palestinian, and Kamal Shehada, a British national, received thirty million dollars each, from "a Bank of Dominica account in Geneva, Switzerland ."

No such bank exists anywhere, and given the strict manner in which the Swiss Government severely restricts the use of the term "bank" to licensed financial institutions, how is it that such an unregistered and unlicensed entity was permitted to exist in Geneva, and to receive, and fund, illegal payments from Dominica's CBI program ? We note that Chinese purchasers of Cabrits are alleging that Range committed fraud, but this has not yet been confirmed.

The law in Dominica requires that CBI escrow deposits must be held by local banks, and all disbursements must have three signatures, none of which can be that of the prime minister. Both Swiss regulatory agencies, and whatever Swiss banks transferred the sixty million dollars to the UAE  officers of Range, should be investigated, to ascertain how a totally bogus "bank" was permitted to have accounts in local banks, as well as wire large amounts out of Switzerland. was FINMA asleep ? Which Swiss bank opened the accounts for a bogus bank ? 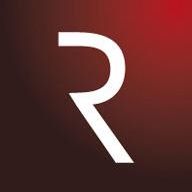 If you were wondering why the two $30m payments were illegal, Range Development sold 800 passports to investors, who paid Dominica $195m for real estate purchases, which is strange, because there were only 160 rooms sold, and even if the cost of constructing the hotel was double what is customary on the industry, say $44m, what happened to the other $150m ? Was it diverted into the Swiss bank accounts of corrupt senior Dominica officials ?

Dominica is presently in the middle of a crisis, after it was discovered that an estimated $1.2bn in CBI receipts is missing from the national treasury. The $60m represents an illegal diversion of Dominica treasury funds, and the transfers constitute money laundering.

Getting back to the ficticious "Bank of Dominica," we call upon FINMA, the Swiss financial markets regulatory authority, to open an investigation into the matter, and into the presence of illegal CBI funds, being CBI proceeds diverted into the hands of criminal conspirators engaged in CBI real estate construction projects. Perhaps they might want to speak to the Swiss bankers involved in this scandal, and close down all CBI accounts from the East Caribbean CBI states.

the relevant allegations from Zampoli's Petition appear below; you attention is directed to paragraph 14: 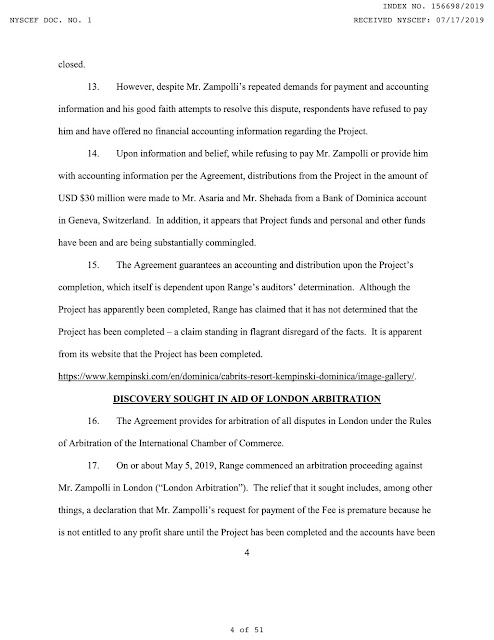