AFTER A DECADE OF DELAYS BY ANTIGUA, LEROY KING IS FINALLY EXTRADITED TO THE UNITED STATES TO FACE THE MUSIC IN $7bn STANFORD BANK SCANDAL 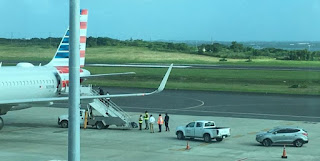 The last significant fugitive from justice in the seven billion dollar Stanford International Bank Ponzi scheme, Antigua's former banking regulator Leroy King has, at long last, been extradited to face multiple charges in the United States. King was observed, in the custody of the US Marshals Service, boarding an American Airlines jet, bound for the US.

King, whose misconduct prevented US regulators and law law enforcement from obtaining evidence for years, in their investigation of Allen Stanford's massive Ponzi scheme, was able to defer his 2009 extradition order for more than a decade. There's plenty of blame to go around; judges who sat on the case for years, then passed it along to another judge, courts that allowed King's attorneys to file a long string of "appeals" that he was not entitled to as a matter of law, and senior Antigua officials, who allowed the legal charade to continue. The King case caused a rift in what were previously good relations between Antigua and the United States.

Local Antiguan sources claim that King is terminally ill with cancer, but whether he is too ill to be tried at this time is not known. He does have first-hand knowledge of systemic corruption in Antigua during the Stanford era, which could result in additional indictments of former or present officials in the Government of Antigua, at the highest level, but it is questionable that he will ever testify.