WHY DO MEMBERS OF CRIMINAL ENTERPRISES WANT DIPLOMATIC PASSPORTS FROM DOMINICA ? 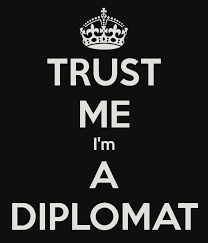 In light of the fact that a number of foreign nationals, all with criminal backgrounds, have obtained diplomatic passports from the Commonwealth of Dominica, often without ever visiting the country, or being interviewed by government officials, the question is often asked : why are they so interested in securing those prized diplomatic documents ?

The answer, I believe, can be found in Article 40 of the 1961 Vienna Convention on Diplomatic Relations, which states:

"If a diplomatic agent passes through or is in the territory of a third State... while proceeding to take up, or to return to his post, or when returning to his own country, the third State shall accord him inviolability, and such other immunities as may be required to ensure his transit or return".

This means that diplomatic passport holders, who can always affirm that they are in transit, when found to be in any country or state, retain their diplomatic immunity, which includes the complete and total privacy of their personal goods. Customs and immigration officers, in all countries exercise deference to all individual who present diplomatic credentials, when traveling, as do law enforcement agencies, who encounter individuals who present diplomatic passports, as a matter of protocol, pursuant to the Vienna Convention.

This protected status, which prohibits their bags and baggage from inspection at ports of entry. affords career criminals ample smuggling opportunities, whether the contraband consists of financial instruments, cash or cash equivalent, classified documents, or stolen property. Its power to facilitate transnational crime should not be minimized, for it is the primary reason that dodgy characters are so intent upon purchasing a Dominican diplomatic passport.

Unless an accurate, and complete, list of all holders, past and present, of diplomatic passports issued by Dominica, is published by the Ministry of Foreign Affairs, we are unable to identify all the career criminals who have such documents issued to them, and their crimes and transgressions will continue, ad infinitum, until the international community steps in, and terminates this clear and present danger to the continued integrity of the nation.