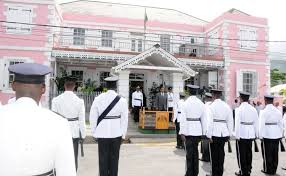 Every time elections approach, in the Commonwealth of Dominica, corruption rears its angry head. back in 2009, the incumbent Dominican Labour Party chartered a Boeing 737, and an Airbus, to fly in expats, from all over the United States, before national elections. The cost was approximately USD$400,000, and where the party got the money to pay for those airliners was never disclosed, but it is suspected that it was diverted from income from the Citizenship by Investment program.

Now, in 2017, with another election on the horizon, the ruling party, which controls the national Parliament, the House of Assembly, is said to be relying upon an amendment to the Elections Law, specifically Section 57B, which specifically provides that transporting Dominicans into the country, for the purposes of an election "does not constitute an offence." It appears that the next election will be business as usual, but now election bribery is legal in Dominica.
Posted by Kenneth Rijock at Wednesday, May 17, 2017