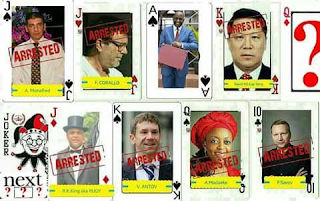 To understand why there is so much controversy, regarding the issuance of diplomatic passports, by officials in the Commonwealth of Dominica, to known criminals, take a quick look at the above illustration. Note the fact that all of those pictured are arrested, save the Prime Minister. Given that one diplomatic passport has the serial number 000425, there may literally be hundreds of dodgy foreign nationals running around with those illegally-issued documents, which generally are respected at ports of entry, by customs and immigration officers, allowing the holders to bring in contraband, of all types, with impunity.

How would you like if a career criminal brought one of these items into your country:
(1) A vial containing the Bubonic Plague.
(2) Stolen plans for the Cruise Missile.
(3) Millions of dollars in US Bearer Bonds, or uncut conflict diamonds.
(4) The disassembled components of a man-portable nuclear weapon.

Unless the holder can prove that he or she is a native-born Dominican, and an actual, functioning diplomat, the presenters of ALL Dominican diplomatic passports should be refused entry at Immigration, for all purposes, and their applications to open bank accounts, anywhere, declined by compliance.