PALESTINIANS, UNHAPPY WITH BRITISH REFUSAL TO APOLOGIZE, TRAMPLE ON BRITAIN 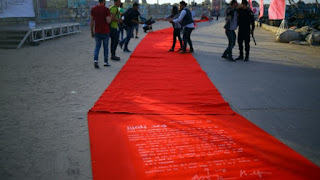 If you have been following the campaign, waged of late by Palestinian groups seeking an apology ( and money) from the United Kingdom, for the 1917 Balfour Declaration which, through the League of Nations actions, and the San Remo Treaty, established a national home for the Jewish People in Israel, their conduct became grossly insulting this week. Arabs, who have referred to themselves as Palestinians only since 1960, and who emigrated to the region from Arabia, Egypt and Syria, object to the continuous 3000-year history of Jews in Israel, notwithstanding its factual basis.

In the Palestinian Territory of Gaza, currently occupied by Hamas, a specially designated terrorist organization, residents literally trampled upon the United Kingdom, by stomping upon a carpet on which the text of the Balfour Declaration was inscribed. Such disrespect for an internationally-approved treaty should be long remembered as yet another act of terrorism.