JUDGE REFUSES TO RECUSE HIMSELF BEFORE SENTENCING OF RICHARD CHICHAKLI 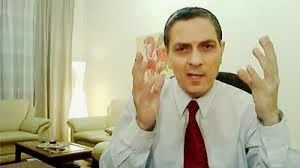 The trial judge in the Federal case, pending in the Southern District of New York, against Viktor Bout's co-defendant, partner and reputed money launderer, Richard Chichakli, has declined to recuse himself. Chichakli had filed an lengthy recusal motion, asking that the judge step down for a number of reasons.

The Court stated that the sentencing will go forward, as scheduled, on December 4, 2014.