Turkey continues to flex its muscles in the region, seeking to project its power in new, and often dangerous, ways, to the discomfort of it neighbors. Notwithstanding strong US objections, Turkey sent as many as five exploration vessels, all capable of searching for oil & gas deposits beneath the floor of the Mediterranean Sea, into Cyprus' designated Exclusive Economic Zone (EEZ). Israel and Egypt have already agreed on their EEZ boundary with Cyprus, but Turkey asserts that it has exclusive rights, based upon a superseded 1960 treaty that predates the 1994 establishment of UNCLOS international economic zones between countries.

The economy of the Republic of Cyprus, which sustained a reverse, not to long ago, cannot easily cope with any new stress, especially that which could threaten its new arrangements with international oil companies from the West. Additionally, any significant problems with Turkey will discourage foreign investment, and affect its position as a safe international financial center.

Financial institutions, or their clients, which have exposure in Cyprus, would be well advised to closely monitor all developments as they unfold, and consider whether the circumstances justify raising Country Risk for Cyprus at this time. 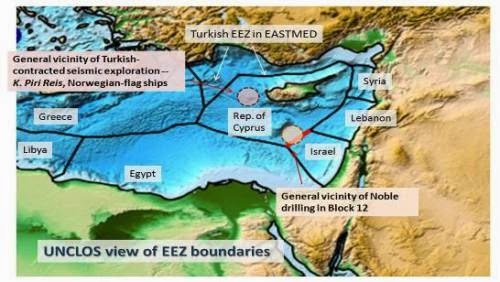