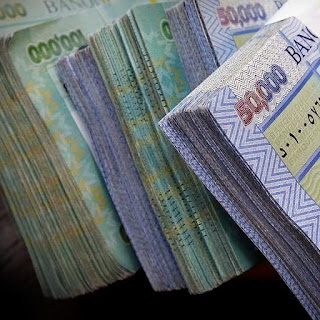 The value of the Lebanese Pound* or Lira, which has been pegged to 1500 to $1USD, has been in free fall of late, due to the country's financial crisis. Black market currency traders are selling Dollars for as many as 2550, and the sale of greenbacks by Beirut banks have been severely restricted.

Given that Hezbollah has ready access to US currency, both from its Iranian sponsors** as well as criminal proceeds from its broad-based campaign of criminal activity, which includes, but is not limited to, Western Hemisphere drug trafficking, it is in a position to exact a cost from any Lebanese faction that is des[erate for Greenbacks. Let us hope it does not choose to take advantage of Lebanon's financial nightmare to increase its hold over the country.

** Long-time readers of this blog will recall that we detailed how Hezbollah obtained US Dollars after the last Israeli-Hezbollah conflict; through deliveries, via private business jets, from Venezuela's Chavez regime. The cash was flown from Venezuela to a destination in the north of Syria, and they trucked into the Hezbollah stronghold in the south of Beirut.
Posted by Kenneth Rijock at Sunday, February 23, 2020