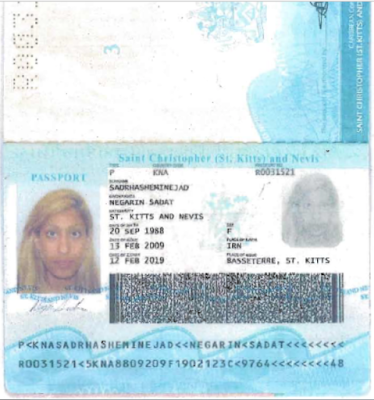 For those readers who were curious as to why the two individuals identified only as "CC1" and "CC2" in the recently-filed Iran sanctions evasion case against BAHRAM  KARIMI, they are the previously-indicted Pilatus Bank owner, Seyed Ali Sadr Hasheminejad, who is a co-defendant in Karimi's case, and Sadr's father, MOHAMMED SEYED HASHEMINEJAD, reportedly one of Iran's wealthiest men.

It appears that Hasheminejad was able to secure St Kitts CBI passports for the others in his immediate family,his two sisters, and his mother, all of whom are known to reside in the District of Columbia. A copy of one of the sister's SKN CBI passports can be seen above. The document seems to indicate that her Place of Birth was "Irn", which is the internationally- recognized abbreviation for Iran.. Many CBI passports issued by the five East Caribbean states falsely recite that the foreign-born holder was born in the Caribbean, which is a blatant, and illegal, effort to hide the true nationality of the holder.

Why Karimi's indictment fails to name Hasheminejad's family as not only the SKN CBI passport holders, and why they are not named as co-defendants, for their roles in concealing  the true nature of the sanctions-violating transactions, is not known. They may have received immunity from prosecution, by having been unwitting conspirators in the scheme to send hundreds of millions of dollars from Venezuela to Iran.
Posted by Kenneth Rijock at Thursday, February 06, 2020