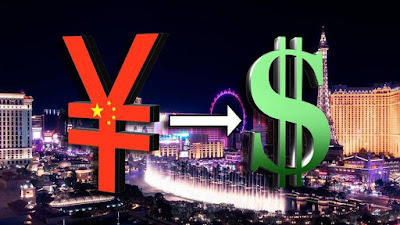 The two Las Vegas operators of a US-based unlicensed money service business, which existed completely underground, have agreed to enter plead of guilty in US District Court in San Diego. What makes the case unique is the fact that it serviced Chinese nationals who sought to circumvent China's strict currency restrictions,  which limit exchange to $50,000 annually The customers received US Dollars here, and paid for them with Yuan (Chinese currency) back in the Peoples' Republic, using banking applications on their cellular telephones from casinos the USA. The US Attorney's Office noted that it was the first case filed against an unlawful underground financial institution serving Chinese nationals evading Chinese. currency controls

While the typical clients were Chinese gamblers playing in the United States, Chinese intelligence agents, and others engaged in espionage for China, could have very easily financed intelligence-gathering activities through the underground MSB. The US Attorney also voiced a concern that their illegal MSB could potentially aid narcotics traffickers.

The defendants, BING HAN and LEI ZHANG, who pled to Operating an Unlicensed Money Transmitting Business, face as maximum of five years in Federal Prison, and a $250,000 fine. the case numbers are 20-CR-369 and 370 (SDCA).