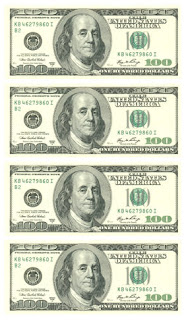 Media reports from the Palestinian Territory of Gaza have confirmed that it is awash with counterfeit currency, including copies of the US one hundred dollar bill. Reliable sources have confirmed that Hamas, which governs the territory with an iron fist, and controls all cash movement, is placing the counterfeits into circulation.

While this information may not be unexpected, given the reputed financial needs of that Specially Designated Global Terrorist (SDGT) organization, the specific item reliable sources have identified as the type of counterfeit is the elusive Series 2006 one hundred dollar bill. The last, and arguably the best, in a long chain of North Korean-manufactured bogus US hundreds, and popularly known as the "Supernote," this Series has been in cold storage in the DPRK, China, and in the Republic of Korea (South Korea), but it is not known to have been in distribution. Just how did it end up in Gaza ?

The most logical conduit is Iran, which distributes funds, as well as weapons and explosives, to Hamas, but precisely how the valuable counterfeits were delivered to it, and in what quantity, is not known. The release of quantities of the Supernote into the global monetary system could cause serious damage to international faith in the Dollar, and both Hamas and Iran have made no secret of their dislike of the foreign policy of the United States. Are they seeking to damage international confidence in the Dollar ?