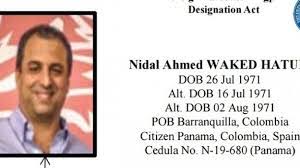 The Government has filed its brief in the the 11th Circuit appeal it brought after the trial judge declined to enter an Order of Forfeiture against convicted Panamanian money launderer Nidal Ahmed Waked Hatum. It claims that the Court committed reversible error, by refusing to order Sr. Waked to forfeit properrtty, or by failing to enter a forfeiture money judgment, even through he had laundered over $10m.

The issues presented on appeal:

(1) Criminal Forfeiture is mandatory pursuant to US law. The Court apparently considered that the statutory $520m sum would violate the 8th Amendment's Excessive Fines Clause.
(2) The fact that Waked no longer possessed the funds involved in the money laundering conspiracy does not preclude forfeiture judgment of an equivalent amount.
(3) a forfeiture amount for Waked's money laundering conspiracy cannot be reduced or eliminated merely because Waked had repaid the defrauded bank. (The banks sustsained no losses).
(4) The District Court's subsequent misinterpretation of language in the Plea Agreement to forego entry of a forfeiture order against Waked also is reversible error.

The brief detailed how Waked moved funds, through wire transfers, from Panama to Miami, and back to Panama, outward bound from International Commercial Bank of China (ICBC) to Ocean Bank of Miami, and return to ISBC. He gave bogus invoices to the banks in support of the criminal money laundering scheme, in an amount in excess of $10.4m, to draw on lines of credit.

At sentencing, the Government requested 51 months' imprisonment, but the Courrt only imposed a sentence of 27 months, noting that the banks had suffered no losses, and that Waked's role was not paramount. Legal observers have been puzzed about the length of the sentence, the fact that he was not obligated to testify against any other individuals, and the lack of a forfeiture judgment against an individual who is known to have been a major player in the Waked Money Laundering Organization. 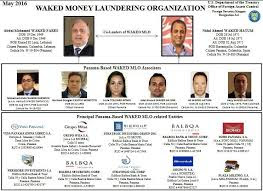 The Waked MLO operated openly* for more than a decade in Panama, and Central America, reportedly cleaning narco-profits for Colombian and Mexican cartels. Waked has since served his short sentence and returned to Panama, through still personally sanctioned by OFAC. Why was a member of a prominent money laundering organization not sentenced to 20 years ? Justice does not appear to have been served in this case, as the punishment did not fit the crime.
_______________________________________________________________________
* The authorities in the Republic of Panama had overwhelming evidence of money laundering in the Waked companies for at least eight years prior to Waked's arrest in Colombia on US charges,, but corrupt officials in government there protected him and his associates.
Posted by Kenneth Rijock at Monday, August 13, 2018