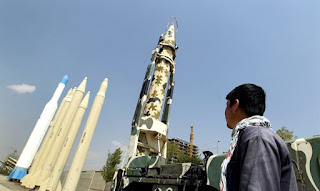 Shi'ite military organizationas in the Republic of Iraq have reportedly received ballistic missiles from the Government of Iran, in a disturbing development that could see Iraq being drawn into a regional war with Saudi Arabia, or Israel, resulting in chaos within its financial structure. Though these weapons are said to be only intermediate-range missiles, they could still hit Riyadh or Jerusalem, provoking a massive response.

The presence of American troops in Iraq, assisting in the mopping up of pockets of ISIS resistance, further complicates the picture, for attacks on US military units in a future Middle East conflict could embroil America as a participant, with potentially devastating effect upon Iraqi infrastructure.

Iraq's poor economy might not recover from yet another war; in addition to the missile shipments, Iran has allegedly supervised the opening of weapons factories, capable of manufacturing missiles within Iraq. What if Israel regards them as threats, and attacks them ?

Given the increased possibility that Iraq will be drawn into the next war in the area, raise Country Risk at this time, after you have assessed the situation. Foreign investment, and indeed any substantial extension of credit,  could result in a total loss, in the aftermath of a third, and more destructive, war in the region.
Posted by Kenneth Rijock at Friday, August 31, 2018