ARE THERE NEW DEFENDANTS IN THE IRAN OIL-FOR-GOLD SANCTIONS EVASIONS CASE ? 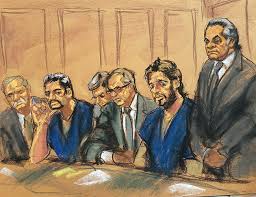 Although there has been no press coverage of the New York Federal case against Reza Zarrab since his Turkish banker, Mehmet Atilla, was convicted earlier this year, the investigation continues. The fact that Zarrab, months after he agreed to cooperate with prosecutors, has not yet been sentenced, speaks volumes about the extensive debriefings that he must be undergoing, and those are strictly for the purpose of obtaining indictments against others in the multi-billion dollar oil sanctions evasion conspiracy.

If you need an indicator of the zeal with which the Government continues to act in this case, look at this. Although it has not been reported, a search of the docket of the Second Circuit Court of Appeals reveals that The United States Attorney in the Southern District of New York has quietly appealed the 32-month sentence handed down against Zarrab's Turkish banker, Mehmet Atilla. Only if Atilla is facing a long prison term will be be more inclined to implicate others.

Whether Zarrab's information has resulted in additional indictments is not known, but there are a large number of sealed filings in the case, which can mean indictments of individuals out of the reach of the long arm of the US Justice Department, be they in Turkey, Iran, or elsewhere.

(A) The sanctions evasion syndicate, in which Zarrab was a principal player, has a number of members active oustide Iran.Who are the other members, and have they been indicted yet ?

(B) No further information has been made public exactly how the syndicate was able to accomplish its goals of covert sales, outside of the details appearing regarding Alireza Monfared, the Iranian holding a Dominica diplomatic passport, and working out of Labuan. Are there other counterfeit diplomats in the network, and what Diplomatic and CBI poassports are they employing to cover their operations ?

We will continue to look for signs of progress in the continuing investigation of the Iran Oil-for-Gold sanctions evasion scandal.