MARTINELLI IS BACK IN PANAMA, SO WHY IS HIS MIAMI COURT FILE STILL OFF LIMITS ?

While corruption prosecutors in the Republic of Panama joust with Ricardo Martinelli's criminal defense team, there's some nasty unfinished business back in Federal Court in Miami, where Martinelli's closed Habeus Corpus extradition case remains strangely unavailable to the press and public. What are they hiding ?

The Martinelli District Court case, which he filed to stop the enforcement of a Federal court order requiring his extradition, to face criminal chages in his native Panama, where he had served as perhaps the country's most corrupt president, was, from the beginning, not available to view. It was not done through a sealing order, but through a curious administrative act: someone at the District Court simply denied total access to the public, to the pleadings and documents on file.

Observers in Panama have long asuspected, ands have repeatedly alleged, that there are two embarrassing reasons why the United States doesn't want the press, and the public to see this information in Martinelli's petition. Exactly how Martinelli was able to enter the US, due to the rampant corruption allegations in Panama is also an open question. The allegations:

(1) Ex-President Ricardo Martinelli was a confidential informant for a US law enforcement agency, or an intelligence service, and he detailed that relationship in his petition, and in subsequent filings.

(2) Then private businessman Donald Trump, when visiting Panana City in support of the Trump Ocean Club Hotel and Resort, participated in certain "extra-curricular leisure activities" which Martinelli's national security agency had captured on video, and Martinelli disclosed this fact in the petition.

(3) Martinelli also holds recordings of actions taken by US Government agencies in Latin America that would severely damage American diplomatic relations with its regional allies. 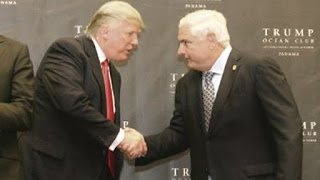 Is the public being denied access to the court file, long after it is closed, to save embarrassment to President Trump and/or US Government agencies ? We cannot say, but there has never been any mainstream press coverage of the mere fact that the file has never been available. It makes you wonder what is in that file.