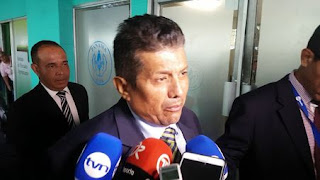 Felipe Fuentes, the Panamanian judge who illegally removed all the court files from the massive insider trading Financial Pacific/Petaquilla Gold Mine, was been suspended for a period of six months. Judge America Vergara, acting upon information provided by the country's anti-corruption prosecutors, issued a suspension order, effective for a period of six months, and ordered a criminal investigation to begin against Fuentes.

Financial Pacific/Petaquilla Gold Mine is the largest corruption case pending in Panama. The fugitive former president of Panama, Ricardo Martinelli, used inside information about the company to make massive illegal profits, by covertly trading in the stock, along with most of the members of his cabinet, his political allies, and even individuals in the group loosely described as Panama's Syrian organized crime syndicate. Many Canadians and Americans lost their entire investment in Petaquilla, when the grossly-inflated priced stock eventually crashed. If that case failed to end in a judgment against the conspirators, Panama's image will be forever tarnished, in the eyes of foreign investors.

One of Panama's dark secrets of late is that the entire Financial Pacific (FP) court file was missing, obviously stolen, to allow the perpetrators of the fraud to escape justice. This is, unfortunately, a common occurrence in the corrupt Panamanian court system. The files are stolen, and the judge then orders production of all original evidence from the plaintiff, while all such records, which were in the court file, are gone, and never recovered. The case is eventually dismissed, and justice is not served.

Judge Felipe Fuentes was reportedly in a motor vehicle accident, and one of the missing court files was literally found on the public highway. Though not reported in Panama's unofficially censored media, a total of seven FP files were recovered, from property under his control. He has been charged with the Theft of Public Documents, a Crime Against Public Administration. Whether he is ultimately convicted will demonstrate if Panama is truly sincere regarding its very public reform process.
Posted by Kenneth Rijock at Friday, February 02, 2018