NO CONFLICT OF INTEREST IN ANTIGUA ? ARE YOU KIDDING ME ! 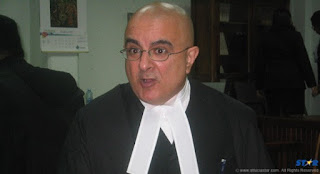 The government's selection of Dominica attorney Anthony Astaphan to investigate Antigua's role in the massive Odebrecht bribery scandal boggles the imagination. Here's why it is a Conflict of Interest on the highest order:

(1) Astaphan was, until recently, the personal attorney for Antigua Prime Minister Gaston Browne. Antigua sources allege that Browne is one of suspects in the bribery investigation.

(2) Astaphan is married to a member of Antigua's Bird family, and has reportedly represented that family in the past. A Bird was a previous prime minister of Antigua.

(3) Astaphan has a long history of representing several East Caribbean leaders linked to corruption. How can he possibly render an objective opinion, when his career is replete with dodgy government officials under suspicion for accepting bribes & kickbacks ?

This case is a textbook example of who NOT to choose to conduct an impartial investigation into charges of corruption, on behalf of the ONDCP. Find someone neutral and truly qualified as an objective finder of fact, not an advocate for the worst that the East Caribbean has to offer its voters. It is humbly suggested that a competent investigator, from outside the region, be engaged, to uncover the truth, wherever its takes him.
Posted by Kenneth Rijock at Friday, February 16, 2018