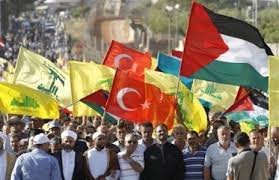 Israeli security agencies uncovered an organization, based in and operated by Turkey, that utilized a front company to bulk cash smuggle Euros into Judea & Samaria (West Bank), for Hamas terrorist activities. A Turkish national was expelled, and a Palestinian arrested, after slightly less than one one million Euros, in cash, were seized form the suspects.

A front company, operating from Turkey, is believed to have moved millions of Euros into Israel, as part of a Hamas terrorist financing syndicate based there. Turkey gives Hamas leaders a safe haven in its country, from which it plans and launches terrorist operations. The Hamas presence there is part of the reason why Country Risk remains elevated for Turkey.
Posted by Kenneth Rijock at Monday, February 12, 2018