IF ANTIGUA'S TOURISM MINISTER WAS IN TRANSIT TO FRANCE, WHAT WAS HE DOING IN LONDON ? 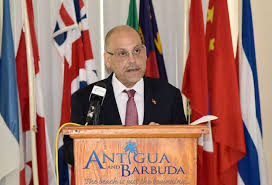 The controversy surrounding the European trip of Asot Michael, the cashiered ex-Minister of Tourism and Investment. continues to raise questions. The people of Antigua & Barbuda are certainly entitled to some straight answers.

These issues remain unresolved:
(1) The minister was en route to a conference in Cannes; why did he not fly to an island in the French West Indies, such as St Martin, Guadeloupe or Martinique, where he could have caught a nonstop flight to France.  Why travel to the UK first ? Was he intending to meet someone there, and reportedly reassure him, and was it the unnamed British national,who had allegedly paid him a bribe, but received nothing in return ?

(2) Was he carrying blank CBI passports, and for what purpose, when he was detained* on orders of the National Crime Agency (NCA), regarding the payment of an illegal "gratuity"?  Though Antiguan authorities state that no passports were listed on the property receipt, our source disputes this.

(3) Why did the minister, now effectively sacked, after his detention and interrogation, travel into Central London ? His destination was the Cannes conference.

(4) Who is the other very senior Antigua government official alleged to be involved in the bribe scandal ? My sources assert that former Minister Michael did not act alone.