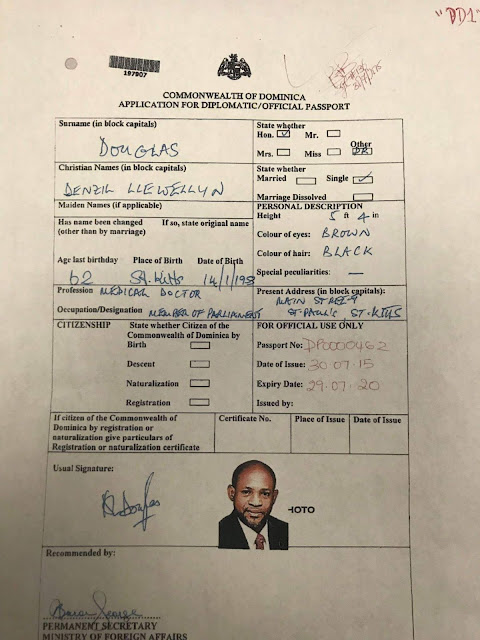 This the Application for Dominica Diplomatic Passport, filed by the St Kitts politician, Denzil Douglas, with photo attached. Those spin masters who have previously declared that Douglas neither applied for, nor received, a diplomatic passport from Dominica should be eating crow right about now, for it validates our claim that he received one, which previously appeared on this blog.

It is a damning indictment of how the corrupt government machine operates in Roseau. Note that Douglas omitted any information regarding how he acquired Dominica citizenship, but his application was nevertheless approved by the Permanent Secretary; note well her signature.

Also, initials at the top right of the application indicate that it was approved/recommended on another level as well. I guess it was going to be approved, no matter how much critical applicant information was missing. Those government functionaries who assisted Douglas in obtaining his undeserved support deserve substantial prison time, for the international crimes they have committed

The application itself violated the Vienna Convention on Diplomatic Relations, which Dominica is a signatory to, by virtue of its United Nations membership. There is no information regarding:
(1) Where the "diplomat" is to be posted or stationed.
(2) Precisely what is the diplomat's job description, specific mission, and duties are.
(3) How the diplomat is to be accredited to a specific jurisdiction.

Only the small number of bona fide Dominica diplomats have the right to obtained diplomatic passports, for they are genuine diplomats, and their staff. The others are all posers.

therefore, all diplomatic applications are nonconforming, and any passports issued are not only void ab initio, they violate international law. They create bogus diplomats, without any duties, who use their new passports to evade international arrest warrants, successfully carry off smuggling through international borders, and engage in money laundering and sanctions evasion.