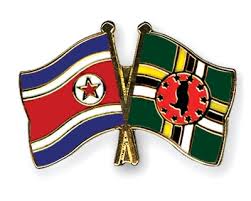 While spin masters, working for the present leaders of Government of Dominica, try to deflect blame for a number of illegal contacts between the Commonwealth and North Korea, the facts  remain:

(1) A Dominica-flagged oil tanker is intercepted on the high seas, near the Korean Peninsula, with a  North Korean tanker, under circumstances that clearly suggest that illegal transfer of oil to the DPRK has occurred.

(2) A Chinese national, based in Hong Kong, acting as an agent for a UN sanctioned North Korean bank, and holding a Dominican passport, is involved in major UN sanctions evasion.

(3) Dominica's Minister of Foreign Affairs, Francine Baron, continues, without legal cause, to refuse to disclose the names and assignments of the individuals holding diplomatic passports, which may exceed 500, given the serial numbers seen on diplomatic passports, given to foreign nationals who subsequently were arrested, accused of international criminal conduct, or UN sanctions evasion. How many North Korean nationals have purchased Dominica CBI passports for huge sums of US Dollars ? We cannot say, but we know that they exist, according to reputable sources in Dominica. North Koreans had ready access to Dominican officials, and CBI consultants, at events held in China.

Are there any North Korean nationals inside the Chinese Embassy in Dominica, and if so, what are they doing there ? The embassy is believed to be an electronic listening post on US military & civilian communications traffic in the Caribbean, as well as within the Continental United States (CONUS)North Korea has had a covert relationship with the Bolivarian Republic of Venezuela, since Hugo Chavez was president, and Dominica's current Prime Minister, Roosevelt Skerrit, is a rabid supporter of Venezuela's radical regime.

Now let us put it together; North Korean agents are known to have posed as Chinese when stationed inside Venezuela. Given that it is doubtful anyone in Dominica, except an academic, can distinguish between a Chinese national, and one from North Korea, who is in the embassy ?
Posted by Kenneth Rijock at Saturday, February 24, 2018