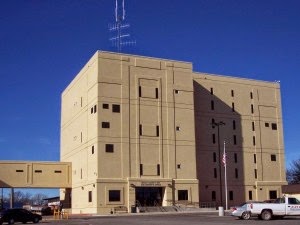 The photograph above is the Grady County Jail in Chickasha, Oklahoma. If you are wondering why that is relevant to Richard Chichakli's case, he was transferred there, from the Metropolitan Detention Center, in Brooklyn, New York, where he was detained prior to, and during his trial. Chichakli wrote to the Second Circuit Court of Appeals, from Oklahoma, seeking information on the status of his appeal. Exactly how did Chichakli end up in faraway Oklahoma, you ask ?

Well, it wasn't because his last name, and the name of the town where the jail is located, are similar. Chichakli received a large dose of what is referred to as diesel therapy, where a Federal inmate thought by the Bureau of Prisons, or the Department of Justice, to be troublesome during his confinement, is shuttled around the United States, in an indirect and delayed route, from his point of origin, in this case New York City, to his final prison where he will serve his time, in this case, Miami, Florida.

In this way, the BOP demonstrates to the inmate that it can be punitive, without breaking the law. if you have never been a "guest" in a rural county jail, the accommodations are rudimentary, at best, sometimes dangerous, and not anywhere near the relative comforts of a Federal correctional institution. I once was dumped at the Escambia County jail, in Pensacola, Florida, because I was being transported during a weekend, and felt compelled to make a weapon upon arrival, for my own protection.

Chichakli had a lot of problems with the corrections staff in Brooklyn, and in Manhattan, during his Pro Se trial preparation, as he felt his conditions of confinement made adequate trial prep impossible. He obviously made some enemies with the staff, and someone took it out on him, by seeing that his transfer was neither direct, nor efficient, and gave him some intermediate stops that were clearly unnecessary.

Now, he will be unable to meet with his appointed attorney, as that individual maintains his law office in New York. Was his designation to a Florida prison made to interfere with his ability to assist in his appeal, or merely a routine assignment ? Think about it.
Posted by Kenneth Rijock at Thursday, March 12, 2015