What on earth were Japan's leaders thinking, when they encouraged their countrymen to continue to advance Japan's dubious claims to a small island group in the East China Sea, literally on the doorstep of China ? The outpouring of Chinese ultra-nationalist outrage shows that emerging China is not about to tolerate it. Doesn't anyone remember that Japan was required to give up all claims to overseas territory it acquired, after the Second World War ? Read the Cairo Declaration, please.

The last time Japan insulted China over colourable territorial claims, the Chinese abruptly stopped the shipments of  rare earth minerals,  commodities that are absolutely necessary to the operation of Japan's hi-tech manufacturing industries. Since all major "spontaneous" demonstrations  in China are orchestrated by the government, assume that there is de facto support in official quarters.

Japan does not need to lose access to raw material that is a mandatory component of its finished products. Please, tone it down, before you find yourself in a bind. Based upon the vehement Chinese response, I suggest you seriously consider raising Country Risk on Japan.

Don't we have enough trouble right now in the South China Sea, where the claims of China's neighbors are more valid than those of China, to have another flashpoint in the region ? Japan should back off, right now, or I fear they will pay dearly for their new attitude, and it will be reflected in an adjustment upward of Country Risk. 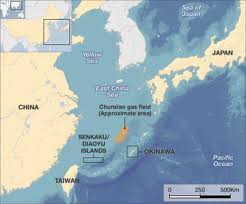