MEXICAN GOVERNOR WHO AIDED THE JUAREZ CARTEL PLEADS GUILTY IN US


If you follow money laundering cases, you will remember this individual, who was a fugitive from justice for two years. Mario Ernesto Villanueva Madrid, the former governor of Mexico's Quintana Roo State, has entered a plea of guilty to a single count of Money Laundering Conspiracy in US District Court in New York. Villanueva, who has already served a six year sentence in Mexico for his crimes, was extradited in 2010.

The Defendant received payments of $400,000-500,000 for each multi-ton shipment of Juarez Cartel cocaine that Villanueva allowed to transit his state. He hid his criminal profits in a brokerage account in New York, owned by a British Virgin Islands corporation.

His broker was later convicted for her role in laundering the proceeds of crime, but only drew three years' probation, later reduced to two, and one year of Home Confinement (House Arrest). Frankly, her methods of hiding Villanueva's money (bogus company account and fictional Mexican owners)  justified prison time. It is assumed that she rendered Substantial Assistance in the recovery of his criminal profits. 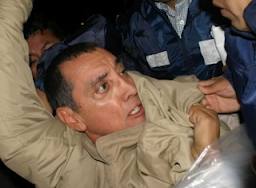