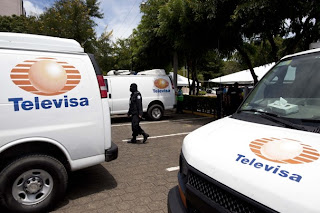 Law enforcement authorities in Nicaragua have arrested 18 Mexican nationals at the frontier with Honduras. Claiming to be employees of the Mexican media giant Televisa, arriving in six Chevrolet trucks bearing the company's logo, and carrying video and audio equipment, microphones and satellite telephones, they stated that they were in Nicaragua to cover a major drug trafficking and money laundering trial. The group claimed that they were journalists, and included their own security staff.

In truth and in fact, they were a group of very well-disguised bulk cash smugglers, for in their vehicles, the authorities found 25 packages, containing approximately $7m in cash. Televisa confirmed that the detailed individuals were not their employees, and that they had no such news crew in the field. The apparent leader of those arrested was stated to be Raquel Correa Alatorre.

It is likely that Nicaraguan authorities received advance information about the operation, for its appears to have been extremely well planned and executed. Since Mexican law now prohibits most deposits of US Dollars in banks and casa de cambios, most bulk cash narco-profits are being smuggled into Panama, or into Central American financial institutions that cooperate with the Mexican cartels.

Money launderers directing bulk cash smugglers often create credible cover stories for their cash couriers, similar to the tactics employed in the field by intelligence operatives , but this elaborate hoax, in support of a cash smuggling operation, appears to be unlike anything seen before.
Posted by Kenneth Rijock at Saturday, August 25, 2012