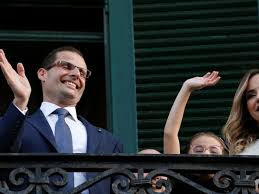 Why is this Man Smiling ?

As previously unknown information breaks the surface in Malta, we start to come closer to identifying that certain individual we have dubbed Deep Throat, after the FBI Agent who provided two American journalists with the clues that they needed to expose the Watergate Affair, which caused the President of the United States to resign in 1974. Malta's version of that powerful whistleblower may have already disclosed, to a foreign law enforcement agency, sufficient evidence to bring down the entire Labour government,  cause the indictment and arrest of several former and sitting senior government officials, including the former Prime Minister, Joseph Muscat.

We don't know much about his identity, but we have a number of clues:

1. He met with the law enforcement agency at a specific location on the continent of Europe, in [redacted]. He participated in lengthy debriefings whilst there. Some sources say it was Italy.

2. He has received Immunity from Prosecution, due to the Substantial Assistance that he has provided.

3. He is currently a member of Malta's Labour Party. Most sources agree it must be a lawyer, seeking to salvage his career, so that he can later practice law abroad.

4. He regards himself as a personal friend of Malta's former Prime Minister, Joseph Muscat.

5. He fears for his life, and that of his family should he be identified before they can be safely extracted from Malta.

6. He surrendered evidence that incriminates several of law enforcement's most important targets.

7. He has agreed to disgorge liquid assets which are the Proceeds of Crime, and he may qualify to enter  the American Witness Protection Programme (WitSec) which will relocate him abroad, under a new identity.

Frankly, I don't think we will know who it is until he (or she) disappears from Malta altogether, only to resurface only at a trial abroad, but we will keep on looking. They say curiosity killed the cat. What do you think, Mr. Muscat ?