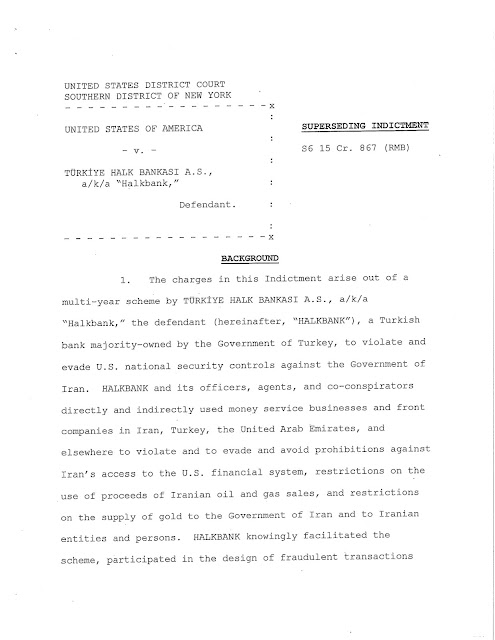 The Turkish state-owned TURKIYE HALK BANKASI A.S., trading as HALKBANK, has been charged, in a 6-count Indictment, alleging  the bank's involvement in a $20bn Iran oil sanctions evasion scheme. The operation, known as Oil-for-Gold, involved the bank's illegal facilitation of the transfer of billions of dollars in illicit profits, benefiting Iran.

Halkbank Deputy GM Mehmet Atilla and the Iranian oil trader, Reza Zarrab, have both been convicted for their roles in the scheme to evade US and UN sanctions on Iran. The allegations also accuse other Halkbank senior staff of participating in the lucrative sanctions evasion scheme.

Readers who wish to review the complete text of the 45-page Superseding Indictment may access it here.
Posted by Kenneth Rijock at Tuesday, October 15, 2019