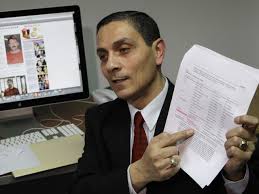 Regarding the pending lawsuit, filed by Richard Chichakli against the United States, pursuant to the Federal Tort Claims Act, which has been extensively covered on this blog, the Government has filed a Reply to its Motion to Dismiss.

It is seeking to dismiss the Complaint for three reasons:

(1) The plaintiff has not met his burden to show that he exhausted administrative remedies under the FTCA.
(2) The plaintiff's attempt to confer jurisdiction on the Court for his Takings Claim is insufficient.
(3) The plaintiff has failed to allege as Waiver of Immunity for his Fourth Amendment claim.

The Motion to Dismiss raises questions of fact and issues of law, but Federal case law states that, for the purpose of examining whether such a motion has merit, all well-pleaded allegations of the complaint are considered to be true. When the Court rules on the motion, we shall update our readers.
Posted by Kenneth Rijock at Saturday, June 15, 2019