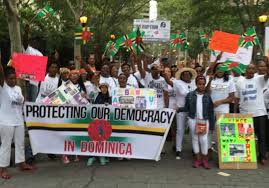 In yet another sign that basic Constitutional freedoms have been rescinded by the Skerrit government in the Commonwealth of Dominica, the upcoming hearing on the Incitement case against senior Opposition leaders is closed to the press and the public, by order of Magistrate Asquith Riviere. The defendants are former Prime Minister Edison James, Senator Dr. Thomson Fontaine, and Opposition leader Lennox Linton.

The case, which most legal observers agree was filed for purely political reasons, and is totally devoid of legal merit, is part of a grand scheme to discredit the Opposition, and possibly see them imprisoned, in advance of the next national elections. The Freedom to Assemble is one of the basic Constitutional freedoms; the Opposition leaders are targeted for inciting and provoking unlawful behavior at an organized, peaceful protest; The charge is, to be blunt,  bogus.

There is no security or other issue present that would justify closing the courtroom, and the magistrate's action has essentially closed the proceedings to public and media scrutiny, much as is the case in non-democratic states. especially in the Peoples' Republic of China, whose representatives have been advising Dominica's Prime Minister Skerrit since it built a huge embassy in the country.
English Common Law, which forms the historical basis for Dominica's legal structure, requires that all trials be open to the public. It is clearly an abuse of discretion for the magistrate to close the proceedings.

Defense counsel has complained to the Court that Senior Counsel Israel Kahn, who is prosecuting the action on behalf of the Government of Dominica, has not only failed to deliver required discovery documents, but that this failure has interfered with the planned cross-examination of the 64 witnesses the Government has listed for trial.  The next hearing is scheduled for tomorrow, June 11, 2019.