It appears that Alberto Diamond Rodriguez, the fugitive former Superintendent of Banking in Panama, is facing criminal charges in another country, El Salvador, where it is believed he fled to, after Ricardo Martinelli left office. Diamond is a relative if the former Panamanian President, and he was named for the superintendency, notwithstanding that he was totally unqualified for the job.

Panamanians will recall that he never filed one money laundering charge against any local bank while in office, and boasted that he brought in $17bn in cash, from Venezuela, to fill the coffers of Panamanian banks. He  is reportedly a target of the anti-corruption prosecutors in Panama City.

Diamond has been charged with Aggravated Fraud, and we are attaching a copy of a portion of a Salvadoran court document, for the benefit of our readers. If you are not familiar with this corrupt fugitive, kindly access our previous articles, detailing his corruption, conflict of interest, and criminal activities, some of which were allegedly conducted with his son, the banker Alberto Diamond Martinelli, who remains in Panama City, with substantial unexplained wealth.

Diamond actually had a local Panama attorney threaten me for my coverage of his client, who richly deserves a decade in one of Panama's notorious prisons, for all his sins. We trust that the Salvadoran authorities will see that justice is done. 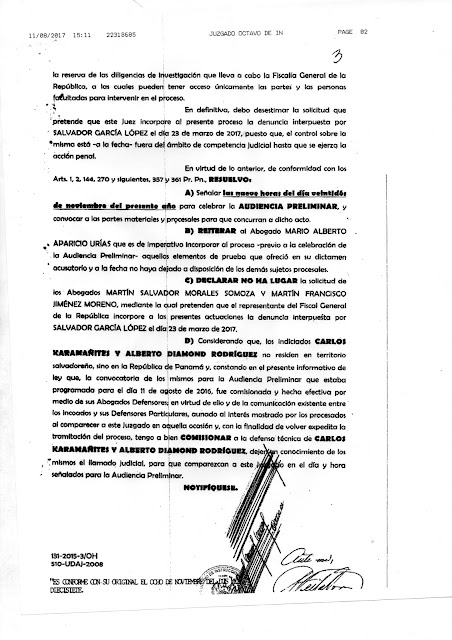