It might be easier to appreciate the gravity of the problem if we use newly-available images.

First of all, the international shipping lanes, between Northeast Asia, and Africa & Europe, pass dangerously close the Spratley islands, where China is building military airfields, on artificial islands, and claiming rights, to the exclusion of all its neighbors. They are vital lifelines for international trade. 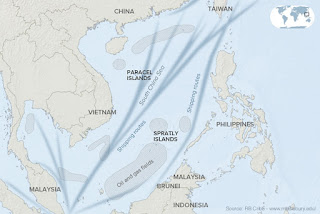 Second, the overlapping territorial claims, which are complicated by the EEZ, Exclusive Economic Zones, and United Nations Convention on the Law of the Sea. China's nine-dash line claim, which is not supported by international law, forms the basis for its aggressive moves, and has raised tensions with its neighbors, as well as the United States.


The shipping lanes must remain open, and the Right of Innocent Passage allowed, lest there be major dislocations in the economies of Japan and the Republic of Korea,Taiwan, and even Hong Kong. Any Chinese interference with the shipment of goods to global markets could result in a worldwide recession, or worse, and could plunge the region in armed conflict.