IRAN ACQUIRES A FLEET OF AIRLINERS, WITH IRAQI ASSISTANCE 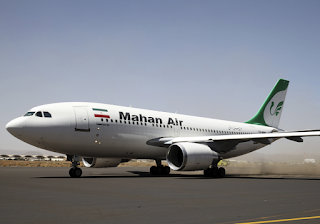 Mahan Air, an Iranian airline sanctioned by both the US and Europe, due to its relationship with the IRGC Qods Force, and involvement in transporting troops and arms into Middle East conflict zones, in support of Iranian actions in Syria and Yemen, has acquired fifteen Airbus airliners. Reports state that nine of the aircraft are already in Mahan's possession, with six additional airliners to follow shortly.

The acquisition of these eight A340* long-haul airliners and one A321 short-haul plane, was accomplished through the complicity of an Iraqi aviation firm, Al-Nasar Airlines, which purchased, and later stored and transferred, the aircraft, to Iran. Formerly part of the Virgin Atlantic fleet, these aircraft should not now be part of an Iranian fleet. Shadowy transfers, through shell companies and third parties operating in offshore tax havens, effectively evade global sanctions on Iran, though US regulators do catch some of the violators, from time to time.

The real problem here is America's purported ally, the Government of Iraq, which begged for military aid, after fearing that its corrupt, and ineffective, armed forces, would be overrun by ISIS, turns around and allows an aviation company, based in Iraq, to effectively avoid US sanctions on the transfer of airliners to Iran. With allies like this, assisting Iran in sanctions evasion, who needs enemies ?

US-based financial institutions that have aviation companies as clients, especially those engaged in leasing and sales of aircraft and aviation parts, must maintain an effective compliance division that is capable of ascertaining whether bank clients are evading OFAC sanctions, through a series of transactions that cleverly skate around the law, for the US bank could suffer the pain of a very public civil fine, for willful blindness.