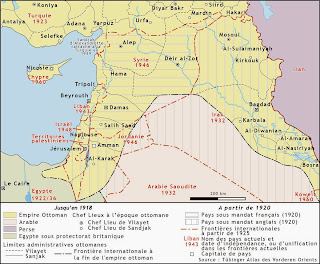 If you are the individual  who is responsible for assessing Country Risk, and your bank, and its clients, are financially exposed in the Middle East, it is important that you consider the real risks of partition of those countries in the region that are engaged in armed conflict and/or major political dissent, and whose population consists of more than one religious sect, or ethnic group.

When, after the end of the First World War, the United Kingdom and France divided up the territory of the former Ottoman Empire, they made a fundamental error in failing to draw international frontiers that would result in national entities consisting, as much as possible, of populations with similar religious or ethnic backgrounds. Let us face facts: Iraq, Syria and Lebanon were all artificial creations, with mixed populations. This was a colossal error, and one or more of these cut-and-paste nations may fragment, leaving entities that have financial exposure in the dust, literally, this year or next.

Should you be an officer at a financial institution, NBFI, or broker-dealer, whose clients, or the entity itself, has extended credit, has pending transactions or trade, or investments in one of those countries cited above, there is a chance that de facto partition, or dissolution, could occur. Sovereign debt will not survive the death of a nation; nor will private companies whose existence depends upon a national, and not a regional marketplace. There are multiple reasons why the fragmentation of a nation will leave creditors of all shape and sizes, empty-handed.

If your financial institution has exposure, branches, investments, major client footprints, or any other type of connection to countries that could be abruptly split up, as a part of the new political reality, or fall to terrorist aggression, you should, early on, seek to minimize your exposure, and cut your potential losses, where at all possible. Iraq & Syria could come apart; Lebanon could explode into Sunni, Shiite and Maronite Christian sectors. All this is possible; so be prepared, with a contingency plan for the future, but also look to shave your total exposure now.