As more details emerge, regarding the strategies & tactics used by most of the members of the Martinelli Cabinet, in their billion dollar insider trading scheme at Financial Pacific, to defraud investors, it becomes obvious that this was a carefully-planned operation, designed to hide all aspects of the funneling of money, to purchase Petaquilla Mining Ltd. stock in advance of the release of favorable information on the company's gold mining operation.

New information verifies that the fraudsters used the facilities of Caja de Seguro Social R.L, more commonly known as COACECSS, a Pamanian credit union and cooperative, to move funds. Coacecss, being a credit union, is outside the jurisdiction of the Superintendent of Banking. 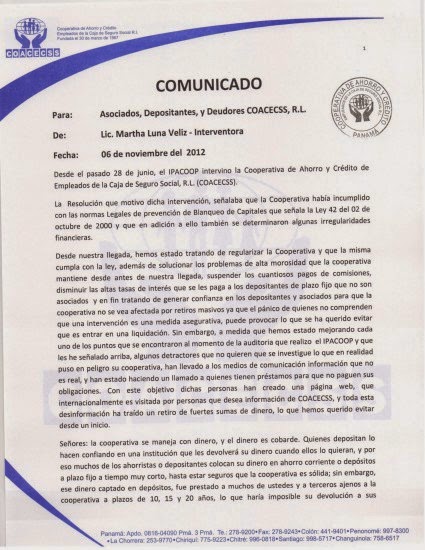 Credit union financial records, implicating Ricardo Martinelli, and virtually all of his ministers in the acquisition of Petaquilla stock, were destroyed after the participants earned their massive illicit profits, and then-President Martinelli ordered that the entity be placed into "Administrative Intervention," the Panamanian equivalent of liquidation, during which additional incriminating evidence was removed from the record of the entity.

Another tactic employed was the use, by the conspirators, of high-limit credit cards issued by Financiera Finangente, which is controlled by the family of then-Minister of Commerce & Industry, (MICI) Ricardo Quijano. To facilitate this fraud, Quijano was instrumental in having Ley 81 passed by Panama's legislature; this law gave Money service busineses (financieras) the ability to issue credit cards.

Finangente's illegal method of funding the massive purchases of Petaquilla stock was clever:

(1) Quijano was instrumental in having a $20m government loan project funded directly to Financiera Finangente.

(2) The ministers, and other participants in the insider trading operation, purchased their stock, using these Finangente credit cards.

(3) Finangente illegally used the $20m it had on hand, for the loan project, to pay for the stock purchases.

(4) The participants then paid Finangente directly, using money they had received from bribes & kickbacks, "earned" due to their official positions. Other players used some of the bulk cash that
had been received, years before. The sources were Ponzi schemer, David Eduardo Helmut Murcia Guzmán, and illegally retained after Murcia was extradited to Colombia, and illicit funds from corrupt Venezuelan PEPS.

Members of the Plata family were named, in 2014, by the US Treasury, as part of a major Panamanian drug money laundering network, with ties to the Middle East. Readers who wish to review the sanctions can find them here http://www.treasury.gov/press-center/press-releases/Pages/jl2397.aspx

Neither Financiera Finangente, nor any of its officers, or Quijano, has been charged with any criminal activity in Panama, and many Panamanian wonder if those powerful individuals, who profited from their crimes, will succeed in their efforts to prevent criminal charges being filed, and thereby cheat justice.