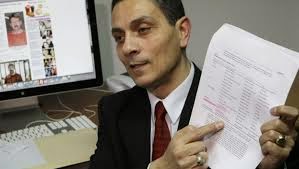 Richard Chichakli, in yet another Pro Se post-trial filing, has moved to vacate the judgment entered by the Court after the jury verdict, pursuant to Rule 33(b)(1), F.R. Crim. P., and has requested a new trial, based upon what he labels as newly-discovered evidence. he alleges that government witness Henry Gayer, who was an officer at the Miami aviation firm where Chichakli attempted to purchase an aircraft, committed perjury.

To summarize the motion:

(1) The defendant asserts that the government witness, Gayer, perjured himself in his trial testimony.
(2) That his testimony hurt the defendant.
(3) That the testimony was material in obtaining a conviction.

Chichakli says that Gayer lied, when he stated under oath that he did not know about the defendant's OFAC status, which precludes business transactions with US persons, and that the Government knew that he was lying. The defendant states that the trial contains admissions by Gayer, to the effect that he knew about Chichakli's SDN status, and was aware of the blocking order against the defendant.

According to Chichakli, the Government was complacent with the lies, in order to sway the jury into convicting him, using false testimony. Therefore, he argues, he was wrongfully convicted. There are a number of pending motions, most filed post-trial, and most filed by the Defendant.