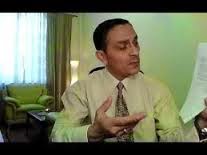 The trial judge in Richard Chichakli's criminal case, in US District Court in New York,  conducted a competency hearing on June 24. The defendant's appointed counsel had expressed to the Court his concerns about Chichakli's ability to assist his lawyer, and a medical professional had examined him, and rendered a report, which has not been made public, due to privacy laws. Chichakli insisted on representing himself at trial, though he has no legal training or experience, and as an experienced accountant was surely well aware of the pitfalls of acting as his own attorney, in Federal Court, but whether he is competent to proceed has become an issue.

The Court's decision will affect all subsequent proceedings. The defendant has already been convicted of OFAC sanctions violations; he has not yet been sentenced, due to a flurry of post-trial motions that he has filed since his trial. The Court has laid down a briefing schedule for both sides, during the month of July, regarding his motion for a new trial, but there are numerous other motions which require disposition, and there has not been any ruling upon any of them.

Court observers of the Viktor Bout and Richard Chichakli cases, especially those who have anticipated that one or both of the defendants would reveal the extent of their association with the American intelligence community, and participation in operations whose exposure might be viewed unfavorably in the court of world opinion, are watching the Chichakli case closely.