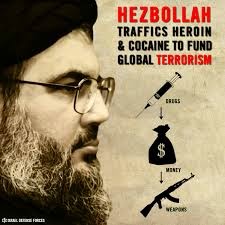 The much-anticipated Hezbollah International Financing Prevention Act of 2014 has made it out of committee, as expected. There are believed to be over 300 co-sponsors of the bill, in the House and Senate, and the bill should become law, on the fast-track, sooner, rather than later.

The provisions of the Act allow the Secretary of the Treasury to deny access, to US financial markets, of any foreign financial institution that facilitates Hezbollah's terrorist financing program. In the Western Hemisphere. Hezbollah Latin America launders its narcotics and arms trafficking profits through Venezuelan banks, and on into Panamanian financial institutions, from where it is transferred to Hezbollah-controlled accounts in the Middle East and Central Asia.

This means financial institutions in North America and Europe, whose customers are engaged in trade and commerce in Venezuela and Panama, should adjust their risk levels accordingly, for a ruling by Treasury, to the effect that a specific bank is working with Hezbollah, and is therefore blocked from the US financial structure, could be costly, not only to your clients, who may have receivables outstanding, but your bank itself could sustain a major monetary loss.

It may be prudent, at this time, to review the scope of your exposure, especially regarding Venezuela, whose banks are most likely to be sanctioned first, without any prior warning, and to take immediate action to reduce risk to the lowest possible level.
Posted by Kenneth Rijock at Sunday, June 29, 2014