The love affair, that Dominica's Prime Minister, the beleaguered Roosevelt Skerrit, is having with the Bolivarian Republic of Venezuela, will not end well for the Commonwealth of Dominica. Given that the latest estimates now, for the first time, place Venezuela below Haiti, as the poorest country in the Western Hemisphere, and that US Dollars have become rare as hen's teeth, unless they are criminal profits, or Iranian capital, one must expect that all of the promised "investment funding" sent to Dominica from Venezuela will neither be clean, nor free of strings.

Remember, scores of Venezuelan nationals, from senior military officers, to the Vice President himself, are on the OFAC sanctions list, known in Latin America as the Clinton List, because it was created during the administration of Bill Clinton. This means that Dominican businessmen who accept funding from Venezuela may later learn that the source of the funds transferred to them may be tainted, land them on the OFAC sanctions list, or cause them to be banned from entering the US as visitors.

The money may also be laundered narco-profits, which could land unwitting Dominican recipients in a 200-person Federal indictment, filed somewhere in the US, as co-conspirators in some vast cocaine smuggling enterprise. Not a happy outcome, to be sure.

Iranian capital, though cleverly disguised as Venezuelan, might just place Dominica front and center in a future American-Iranian conflict, economic rather than military, as the US seeks to reduce the influence of its global adversaries in the Caribbean Basin. While Gunboat Diplomacy is a vestige from America's past, there are far more subtle ways for the United States to keep foreign influence out of the Western Hemisphere. The Monroe Doctrine is far from dead; Ask Grenada and the Republic of Panama. 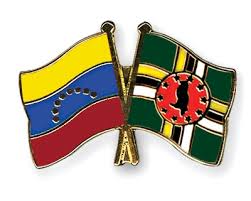 If Dominica accepts suspect investment from Venezuela, the risk of future OFAC sanctions problems, even potential exposure to US criminal charges, serves to further increase Country Risk. We trust that cooler heads will prevail, and Venezuelan, or Iranian, dollars will not find their way into Dominica. Remember, Iran is regarded as a State Sponsor of Terrorism, and no matter how much greed the Skerrit government possesses, how can it take money from a radical islamic dictatorship, which treats its people, especially minorities, worse than Nazi Germany ?
Posted by Kenneth Rijock at Tuesday, February 21, 2017