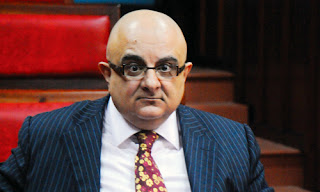 Dominican lawyer Anthony Astaphan, who, though he refuses to admit it on the record, is Dominica PM Roosevelt Skerrit's attorney and chief spokesman, has been filling Dominican newspapers with commentary, hawking his support for the illegal diplomatic passport scheme, has a darker side to him that is not generally known in Dominica. He has been responsible for interfering with the the administration of  American justice, involving individuals responsible for Antigua's Stanford International Bank scheme.

Astaphan has long represented the fugitive Antiguan former banking regulator, Leroy King, who has been wanted in the United States, to face justice for his prominent role in concealing convicted fraudster R Allen Stanford's massive Ponzi scheme, from American regulators and investigators. King is the only major target of the Stanford case  not yet in custody, and Mr. Astaphan has had a major role in keeping him out of an American courtroom. Remember, King is the Antiguan regulator who reportedly swore a blood oath, in the dark of night, at an isolated airfield, to Stanford, and his criminal enterprise, for which he was certainly well compensated, as were many other senior Antiguan leaders. A search of Antigua newspaper articles confirms that Astaphan is shown as counsel for King, though he apparently now is denying it.

How has he accomplished this legal feat ? Simple, as the dominant person on King's legal team, he has, through delays, changes in assigned judges, and tactics not supported in either the law, or the facts, delayed King's extradition to the US, for 8 years. Given that the judicial assignment to the King case has been intentionally passed around, like a basketball, which is one of the ways that justice is infinitely denied. Obviously, Mr. Astaphan has found a way to game the system, to insure that King never is ordered extradited, to face the music. He has engaged in dilatory practice, to deny the administration of justice.


Why is Astaphan so focused on the King case ? His father-in-law, a former Antiguan Prime Minister allegedly received large sums of money from Stanford. Remember, Stanford's banks were licensed in Antigua. If King is ever extradited, to US District Court in Texas, where Allen Stanford received a 110-year sentence, King faces a probable long sentence, which might even amount to the rest of his natural life; He certainly will not desire that outcome.

The only way that he can reduce that sentence is to render Substantial Assistance, to the extent that others are indicted, and criminal proceeds money received. Just who do you think Mr. King will offer damaging testimony against ? The former PM, definitely; Mr. Astaphan himself, as a co-conspirator in the Stanford Ponzio scheme ? Possibly; remember, Astaphan has represented his father-in-law for many years, in a wide variety of matters, and broad American conspiracy statutes might easily be applied to his conduct. Under US law, the attorney-client privilege does not apply when the lawyer engages in criminal activities with his client, even if the lawyer is unaware that he is facilitating a crime. This is
called the Crime or Fraud Exception. I wonder how much Mr. Astaphan knows about  American Federal criminal law ? He is potentially exposed there.

Antigua was seriously, and permanently, damaged, by the scandal generated by Stanford's criminal enterprise. Dominica should take heed of that sad story, and cast off its covert diplomatic passport money machine, and its supporters, as soon as possible.