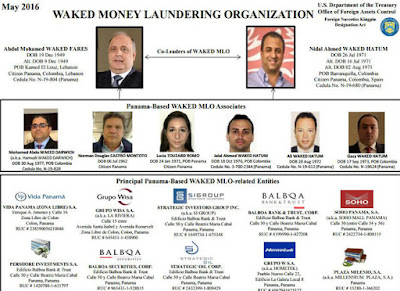 Nidal Waked Hatum,  a Colombian "businessman" who allegedly led a multi-million dollar enterprise in Panama, that engaged in laundering criminal profits for Colombian & Mexican drug traffickers, has been denied bond for the second time, in a Miami Federal courtroom. He was extradited from Colombia in January, and many of his companies placed on the OFAC list.

A US Magistrate Judge originally denied him bond, and his attorney took the issue to the District Judge who will try his case. At the hearing it was revealed that Waked has a Spanish passport, A Panamanian passport, and is a resident of Canada. The judge, noting that he has no ties to the US, and that his wife was refused entry, ruled that he was a wealthy flight risk, who should be subject to pretrial detention, until his case is heard.

We wonder, given that Waked's money laundering activities were well known, how he, at the time of his arrest, held a Spanish passport, and residence in Canada. This economic citizenship problems, where dodgy individuals pay a lot of money to obtain a passport in another country. continue to confront  law enforcement, when the target's multiple access to passports is exposed at his arrest, seem to be increasing, but no international movement to ban them is on the horizon.
Posted by Kenneth Rijock at Monday, February 20, 2017