UNITED STATES HAS HAD COPIES OF VENEZUELAN CEDULAS HELD BY HEZBOLLAH FOR SEVERAL YEARS, BUT FAILED TO INFORM ITS CITIZENS 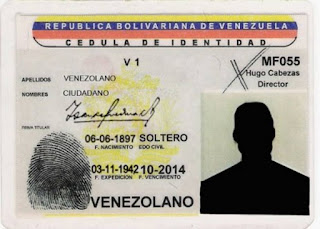 The exclusive news story, recently released by Cable News Network (CNN), regarding the issuance of legitimate Venezuelan identity cards, and passports, to dozens of Hezbollah terrorists, may have surprised most Americans, but, in truth and in fact, US law enforcement agencies have had copies of those identity documents for several years*; they conveniently classified that information, keeping it out of the hands of the Americans who need it most, the country's financial institutions, money service businesses, casas de cambio, and foreign exchange firms.

Unfortunately, our government fails to see that, denying bank compliance officers the names and photographs of known terrorists, means that they can walk into a Miami bank, with official, legitimate Venezuelan identity documents, and open an account, their Hezbollah affiliation not known. If the depositor is indeed facilitating the financing of a terrorist operation, secrecy of the identity card and passport has been deemed more important than preventing such acts.

I know this because I have seen those documents,. and they were turned in by others; the Arab names of the terrorists have been turned into Hispanic versions, to successfully survive compliance scrutiny. Perhaps if Americans knew more details, regarding the penetration of Latin America, by terrorist organizations dedicated to the destruction of the United States, effective action might be taken to detain, or imprison, those agents.