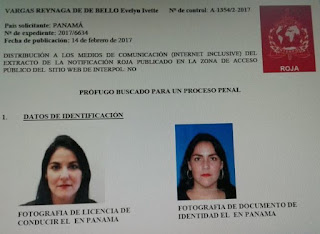 Not only is the Anti-Corruption Prosecutor's Office in Panama seeking, through an INTERPOL Red Notice, the two grown sons of fugitive former president, Ricardo Martinelli, for their role in receiving, and hiding at least $6m in bribes from Odebrecht, it is also looking for Martinelli's money laundering assciates, who assisted the sons in acquiring the illicit wealth, and then secreting the money in Swiss accounts, and this week they got their hands on one.

Panamanian attorney Evelyn Vargas Reynaga, who also had a Red Notice filed against her, surrendered to law enforcement in Mexico City this week, and was flown to Panama, where she was taken into custody, on suspicion of money laundering. The total estimated amount of bribe & kickback money, paid by Odebrecht, to "qualify" for lucrative government contracts, continues to increase, as the investigations uncover additional recipients, and more bribes were now known to be paid to those whose illegal conduct is already known.

Where exactly are Martinelli's two sons ? They did submit, in a court proceeding in Panama, affidavits notarized in Miami, but whether the brothers were actually in Florida is not known, and Panamanians are not known for strictly complying with the law, when it comes to notary publics, as the massive amount of notary fraud in Panama can attest. Some say Miami, but other say they were denied entry. They were last seen in Spain, but have moved on after they were named as targets.

The United States, which has sustained a bit of a black eye, for letting the guilty ex-dictator publicly  gorge himself in Miami, still shows no signs of processing his extradition to Panama, and may now find itself not receiving all the favors American law enforcement regularly seeks in Panama City.